“Jobs fill your pocket but adventure definitely fills your Soul”?

It is absolutely true that a job is aimed at filling your pockets but an Adventure shall be the ultimate tonic for the soul which provides you the right refreshment to carry on your schedule with new energy. Cyber Help India has always believed that work, when mixed with timely trips, could double the creativity and also the bond within all the members of the team. This was the ultimate reason the 2019 Manas National Park Adventure was planned and the team was really excited and absolutely ready for everything that this real-life Safari had in store for all.

Heading on a Scenic Road Journey

The entire team arrived and we packed light for the trip. We had 2 vehicles here and one had headed to NJP Railway station to pick up the remaining team from our Kolkata Branch. This trip was also a Summer Escape with each one of us dressed light and right, according to the weather. Our caravan started at around 9 AM and our Kolkata Team was supposed to join us at the breakfast point. 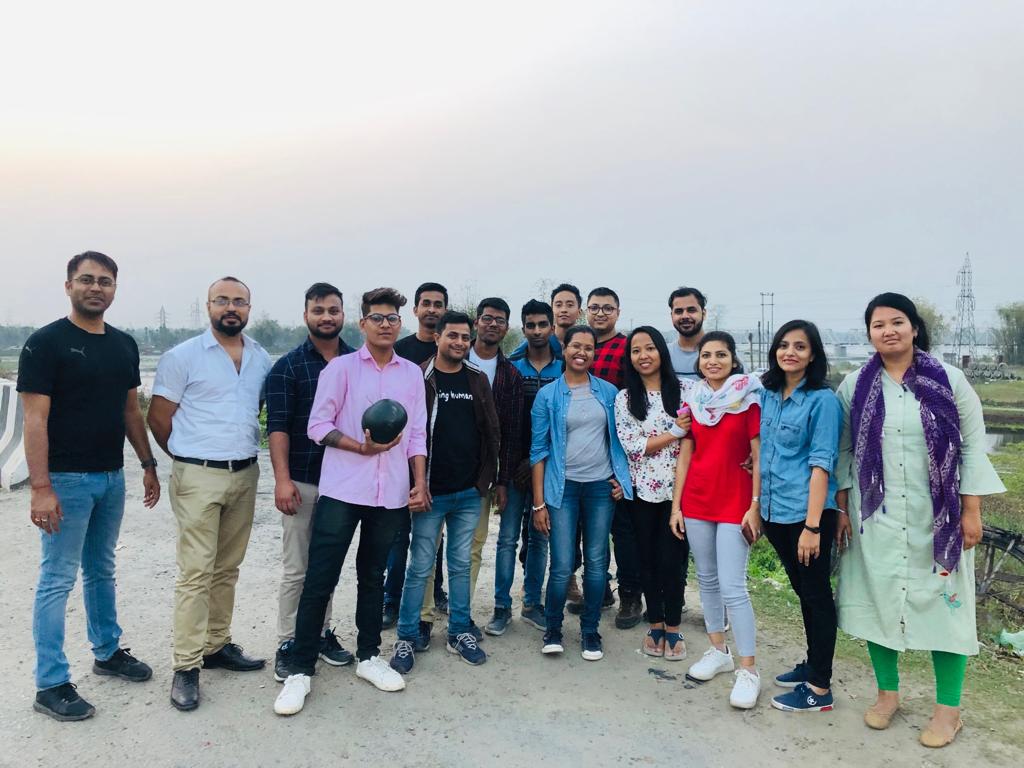 The First Stoppage and Reunion

We stopped at the Teesta Barrage after a few hours of drive and we were scheduled to be joined by our third vehicle which had the team members from our Kolkata office. It was a scenic stoppage with lined shops specializing in regional breakfast of either Omelet Toast or Maggi. As we had ordered and started our breakfast, we were joined by our third vehicle and the much awaited Team Members from Kolkata. An introduction was carried out and breakfast too. We were then off towards our road adventure.

Entering the Gateway of ‘Dooars’

Dooars is the alluvial floodplains that lie south of the Himalayas and north of the Brahmaputra River basin. This beautiful region is blessed with unending tea plantations and some untouched green forests. The roads that followed were too beautiful to be true and had tall lined trees and greenery on both sides of the road. There were some members in each vehicle that hadn’t been here and it really was a scenic comfort for them too. We also crossed many National Parks and Wildlife Sanctuaries like Jaldapara, Lataguri forest, Buxa Reserve and Chapramari Bird reserve. The roads were lined with greenery and the freshness of Dooars replenished us from deep within. This beautiful stretch kept us attached to our windows and it was surely a Gateway that none of us felt should end.

It is one of the best Dhaba along this highway and our lunch stoppage could not be tastier. You must know that it is a popular lunch point and is often crowded with hungry people taking the highway. Seating was comfortable and cozy with a long list of menu to choose from. It was a family lunch with all of us seated together. We were soon done with our lunch and we were pretty impressed with the food and realized the reason behind it being a popular lunch stoppage.

Soon, we crossed Bengal and were soon driving along the beautiful landscapes of Assam. It was quite an amazing experience for some of us who had never been to Assam. Every new place is filled with endless secrets and so many of us stared the passing places in amazement. Their houses and culture could be analyzed through their cultural attires, which were worn by few of the locals that we passed. We headed on with our trip with more amazing things to witness. The air was refreshing and being a first visit for some, accelerated the level of excitement. 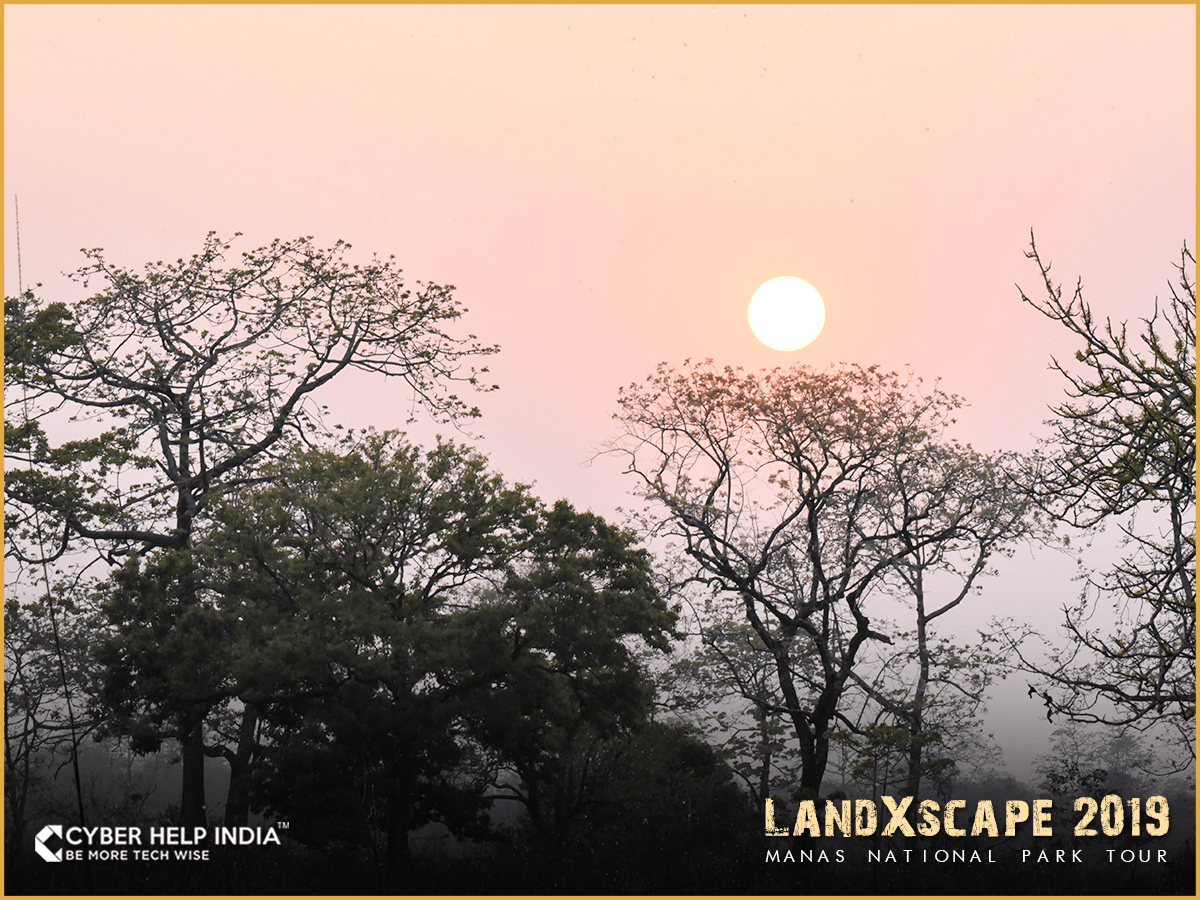 It was probably the first time that we were tired as well as refreshed. Tired of the long road journey but refreshed by the time we were having during this mad adventure. The sky of Assam slowly clad in darkness and as the destination neared, we were filled with more and more energy. The milestones acted as our countdown and every milestone was eagerly spotted for better realization of the current position. It was soon dark and our vehicles were dark, the songs were soothing and the excitement charging. 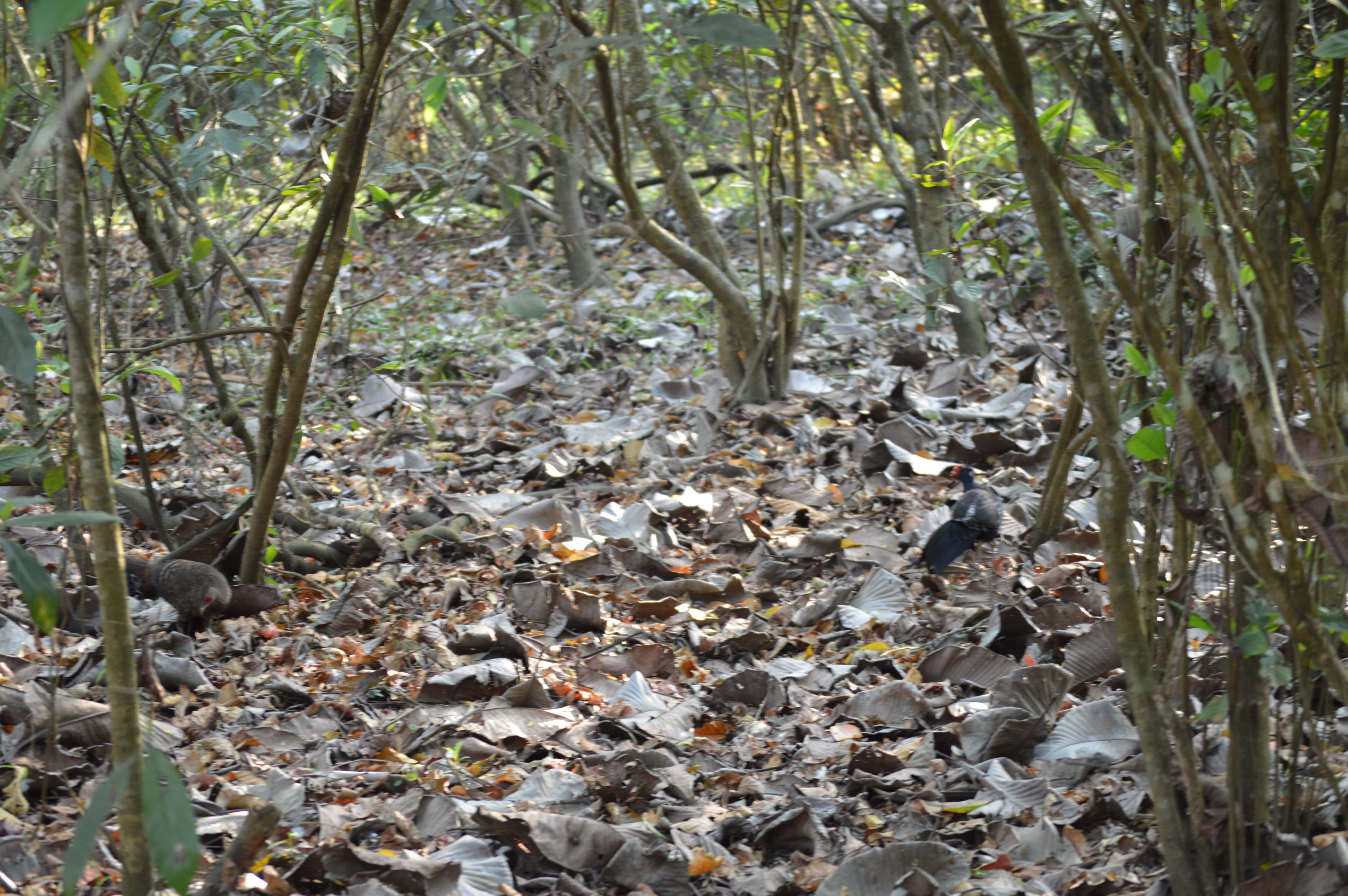 The Welcoming Surprise on reaching Manas

Our three car caravan slowly entered the UNESCO heritage Manas National Park. The documentation didn�t require much time and soon we had entered the National Park and headed towards our resort. It was three cars and our headlights that illuminated the roads ahead. It was silent, dark and the excitement soon plunged into fear when we realized that the bars on both sides were electrocuted and it meant that the path we were heading could also be interrupted by wildlife. The chances were less but the feeling was amazing. Soon we saw the illuminated cottages ahead and soon entered this amazing compound which gulped our tiredness from the journey. 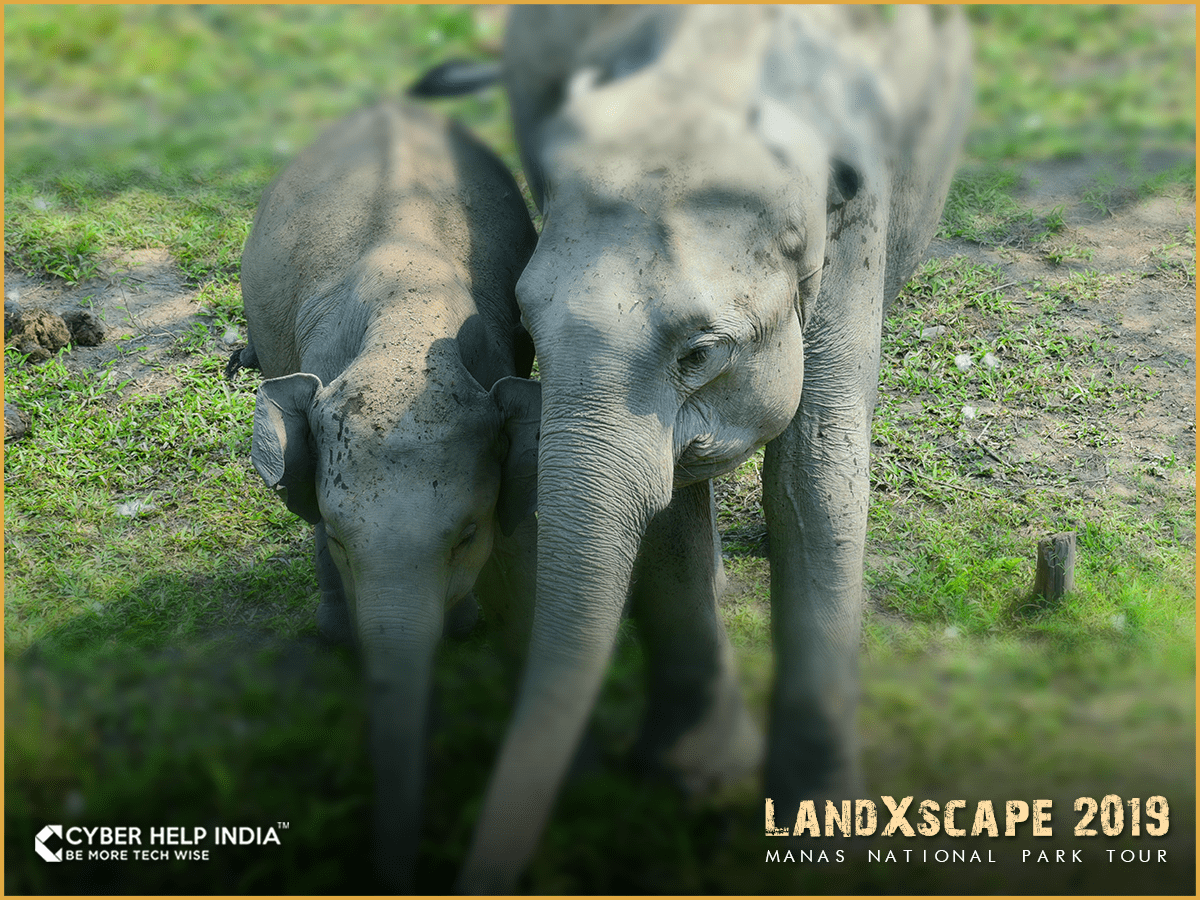 How often have you been welcomed by the enormous Elephant? The beautiful resort had two domestic elephants to themselves, tied but they looked mannered. The compound had numerous huts and a large compound in between the endless dark forests. The huts were lit beautifully and the Help Desk was on a platform made of Wood and lit with minimal lights but in the best possible way. Soon Cyber Help Team Went into their allotted huts with a long night to follow. 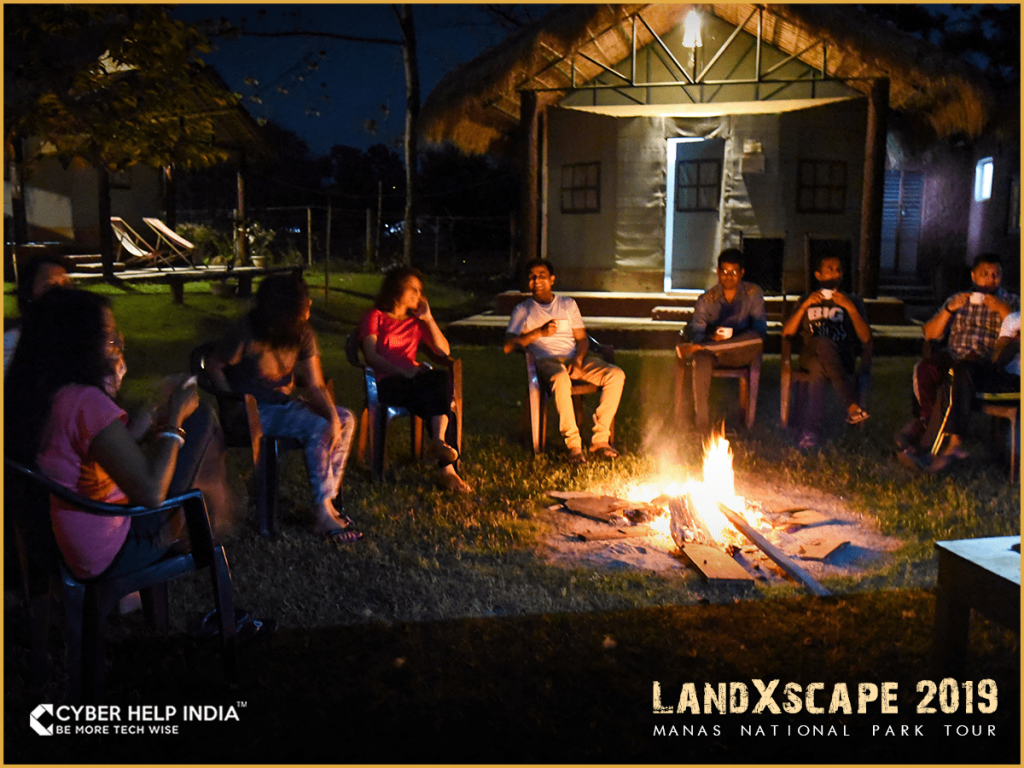 After a while, we came out of our rooms refreshed and saw a huge bonfire with rounded seating which was a pleasant surprise. Soon we gathered here in a circle and sipped our refreshing Assam Tea. Our founding members and our mentors, Sir Gautam and Ma’am Anita shared their motive behind this amazing company tour and started the bonfire with some interesting topics and our opinions on it.

The motive of this bonfire was refreshment and bonding, which was set right by the incoming delicious cuisines and the beverages that worked like magic.

No Network No Problem

The night molded into a wonderful experience as everyone was listening and talking to everyone else. There was not a single bar of the network so we were completely cut off from our respective worlds. Though unintentional, we were having a gala time and network really wasn’t a big issue anymore. The night finally came to an end with a full day of Adventure to follow. 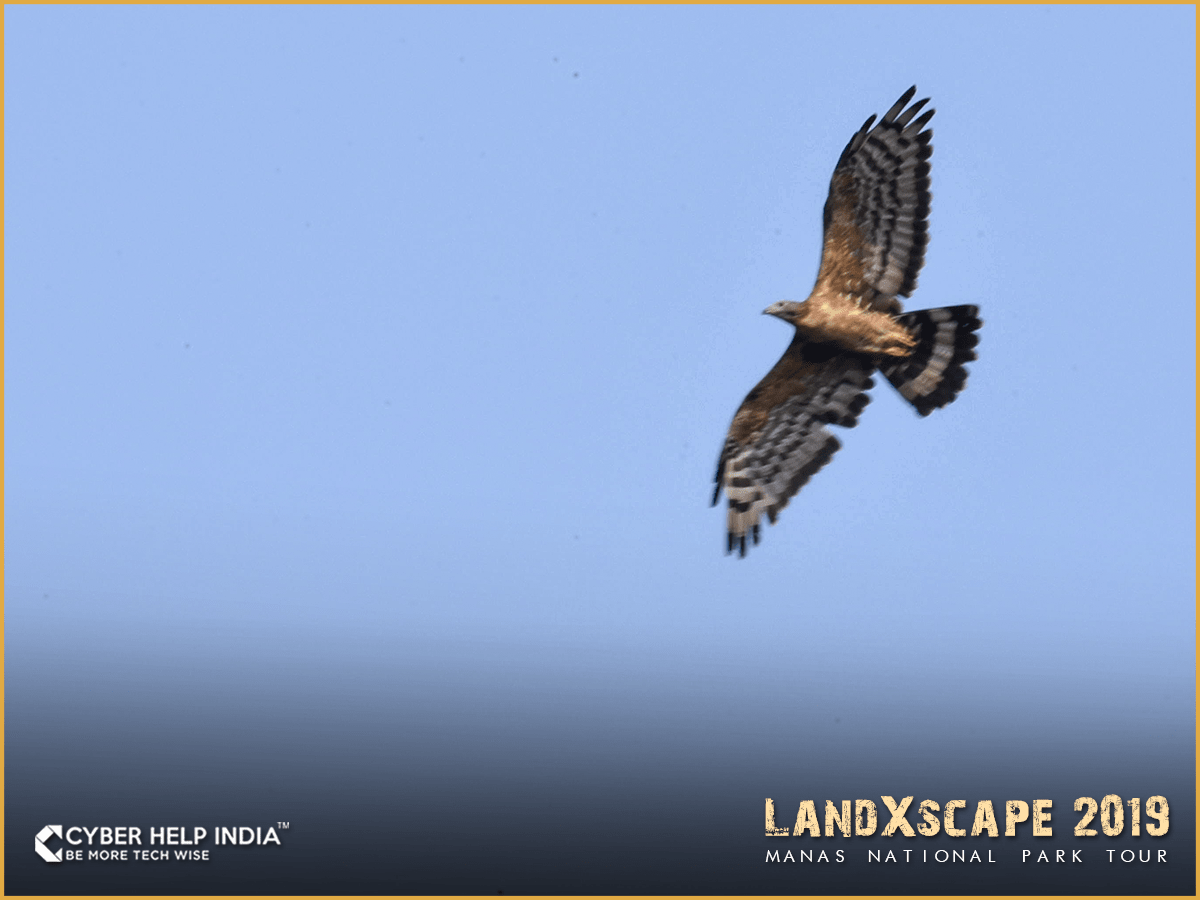 Wake up its Safari !!

Overview of the Manas National Park

Manas National Park is a UNESCO world heritage site, a tiger reserve and also an elephant reserve located in the Himalayan Foothills. It is spread across the border towards Bhutan where it is called Royal Manas National Park. It was declared a sanctuary on October 01, 1928 and was designated a World Heritage site in December 1985. The sanctuary is home to a great variety of wildlife, including tiger, Golden Langur, Wild Buffalo, Hispid Hare, Pigmy Hog, Capped Langur, Indian one-horned Rhinoceros, Elephant, Gaur, Hog Deer, etc.

The Start to a Thrilling Safari

The three Jeeps started on the much awaited journey and the open vehicles in itself was a great starter to this adventure. Soon we kept penetrating inside the Manas dense forest with eyes revolving to sight the unseen. The open jeeps allowed us to stand up and provided us a 360 view of the jungle. We were attentive and were briefed about the animals and birds that we kept witnessing. It was an adventurous encounter until now with sightings of elephants, deer, birds, pheasants and a few others before we stopped for breakfast. 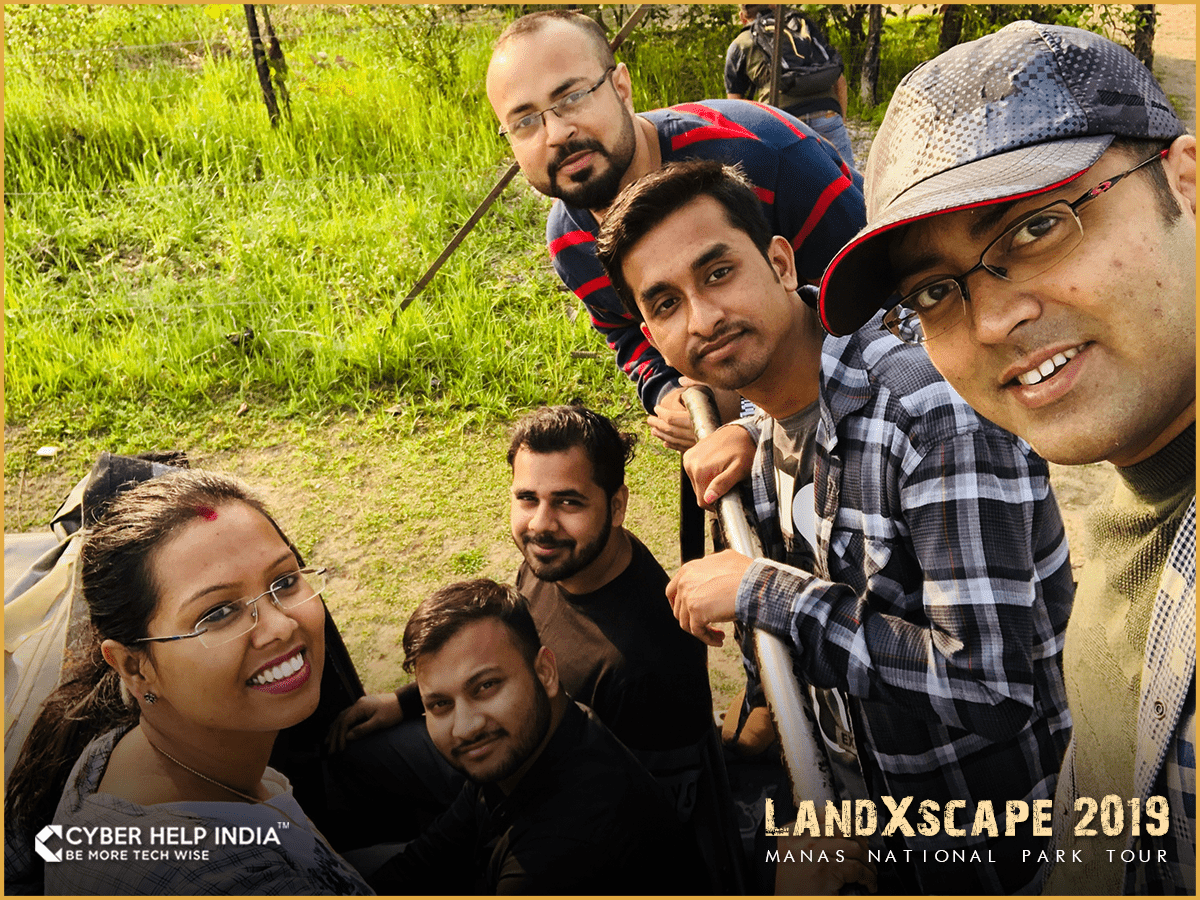 After an interesting afternoon of wildlife safari, we soon stopped at an uphill which seemed quite scenic with a white meandering river that divided the Manas National Park and the Royal Manas of Bhutan. The river glittered to the backdrop of the beautiful hills whose green faded with distance. 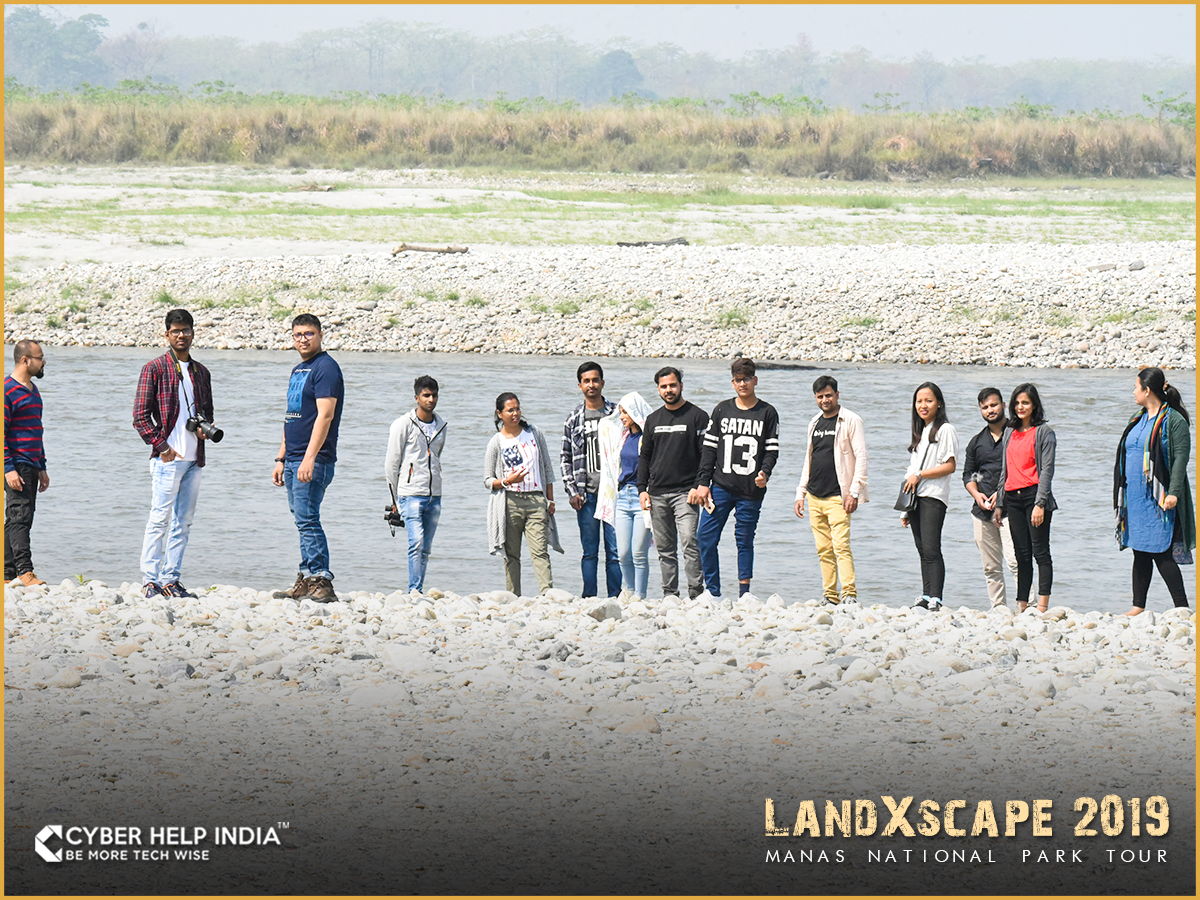 Our kitchen was on top of that hill and it was quite refreshing along with some tasty cuisine. The area was filled with langoors of all sizes and ages, who looked naughty but never attacked any visitors there. There was a harmony between the langoors and the people that were present there. 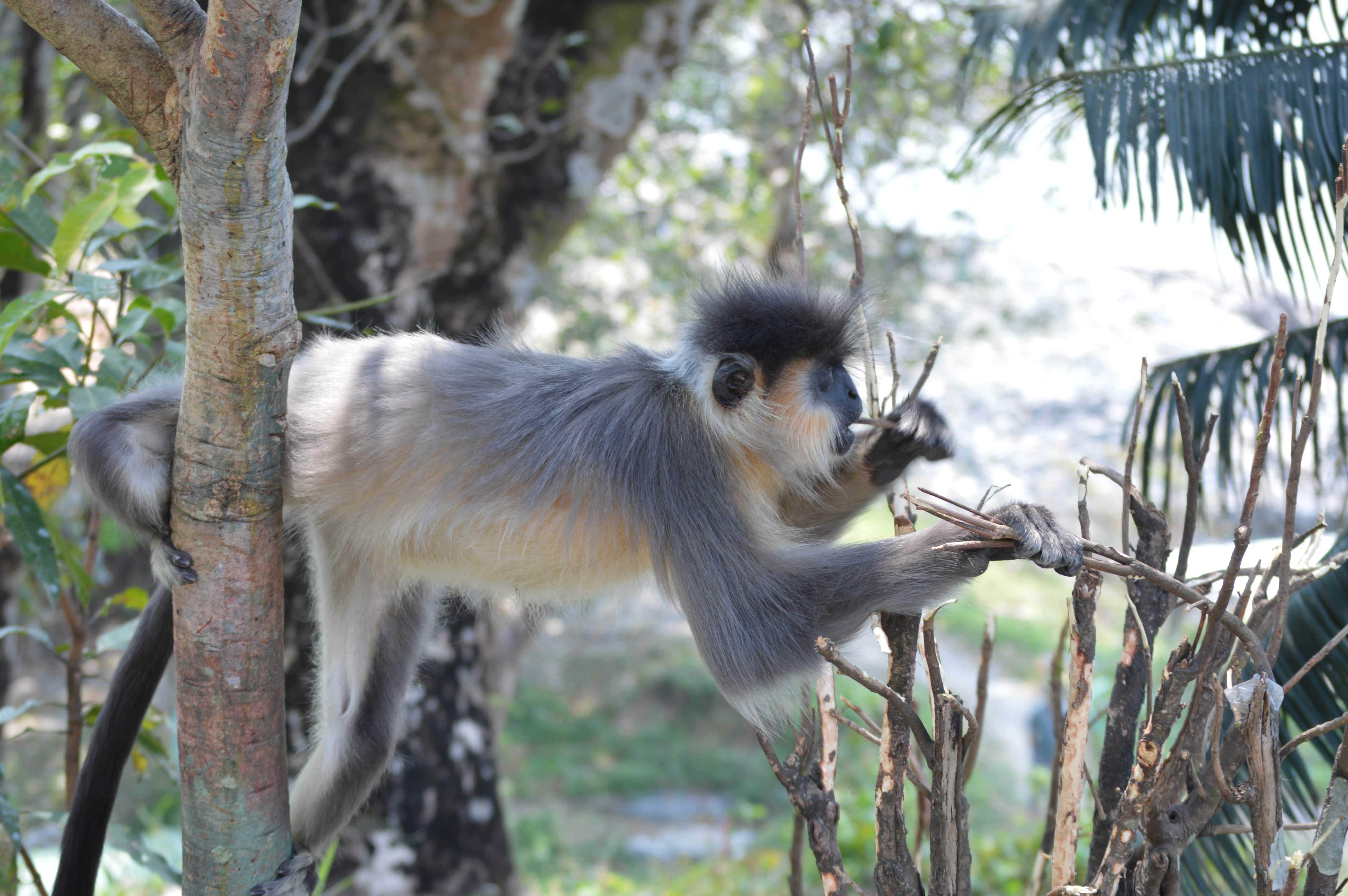 The Other Half of the Safari

After lunch, we started penetrating more inside the forests and this was enough to provide an adrenaline rush. Excitement doubled and so did fear but we were living an adventure that all of us had dreamt of but never experienced. We were lucky enough to view much exotic flora and fauna here and towards the end.

Memorable phase of the Safari 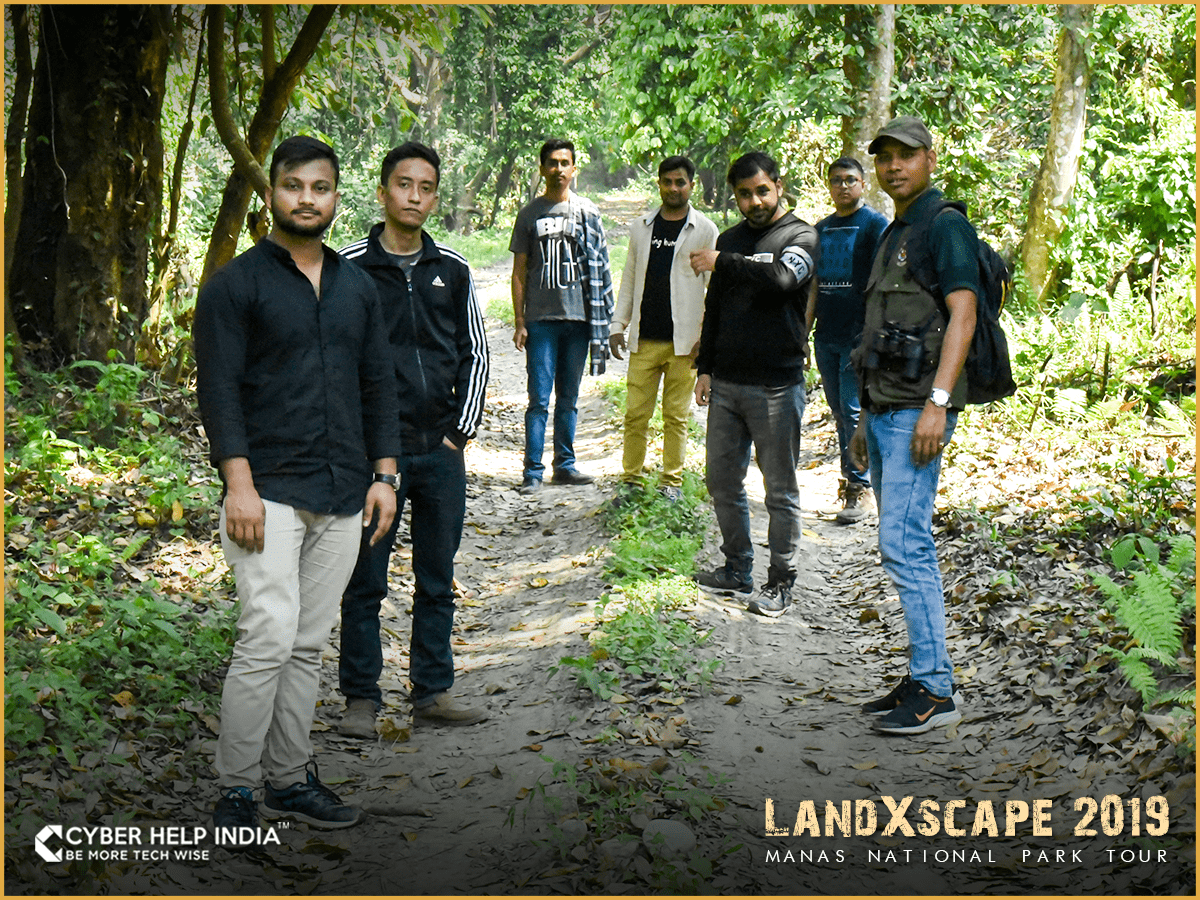 Our guide informed us that there was an information about the death of a baby elephant and asked us if we would love to see it. Though it was supposed to be quite dangerous and life risking due to the angry approach of the mother Elephant, we decided to take the risk. After a long drive we soon saw the baby elephant carcass few meters away but as we drove close, the mother suddenly appeared out of nowhere and the situation soon became risky. Elephants are said to chase vehicles when they fear danger and so we reversed our Jeeps and decided to let the elephant mourn in peace. On return, we saw the strong Rhino and some Bison up close. It was a pleasant surprise and a great scene to end our trip on a memorable note.

It was a memorable experience for the entire team of Cyber Help India and a great initiative from our Mentors, Sir Gautam and Ma’am Anita who wanted us to explore and have some amazing memories to cherish forever. 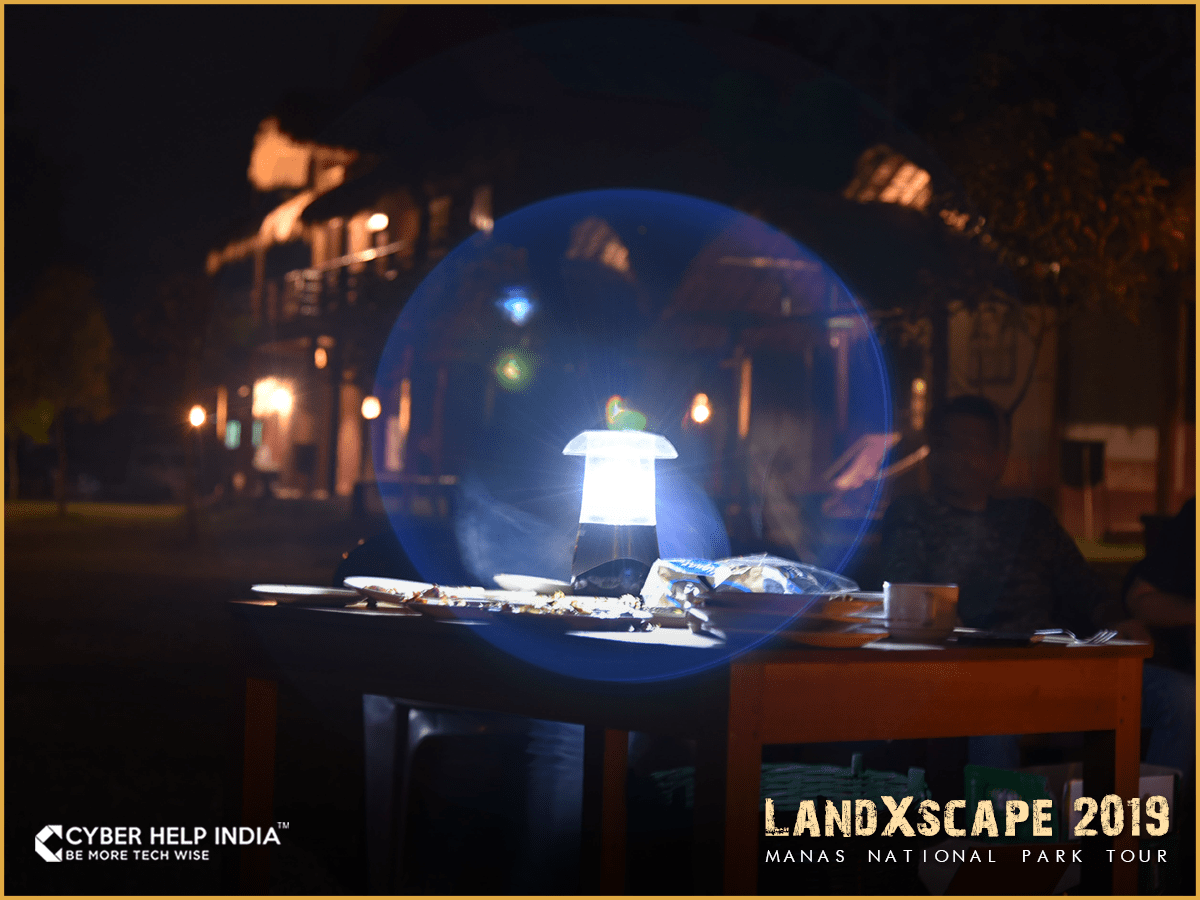 We did have the best time of our life and did not want this moment to end. The night ended with another Bonfire and some more beautiful memories to take back home. 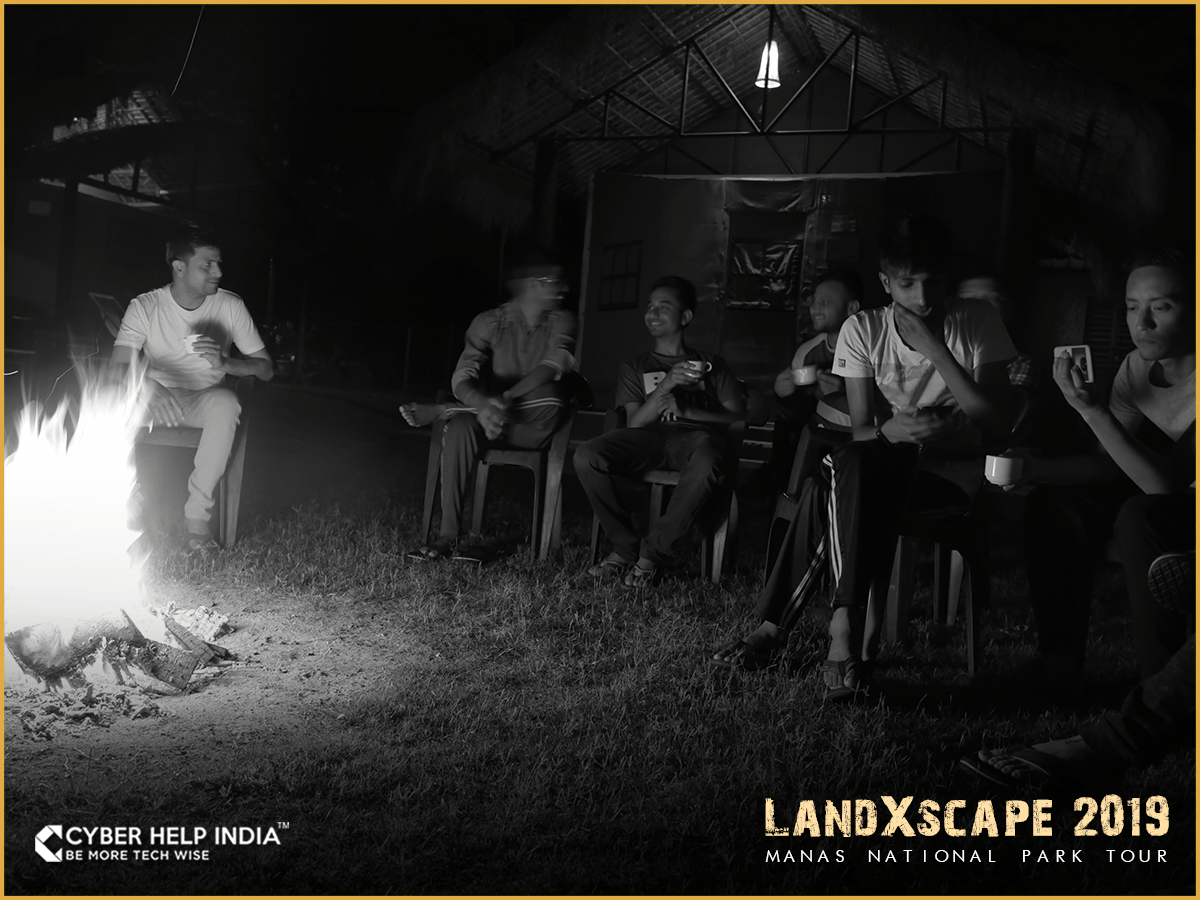 What we took back

It was an amazing initiative which gave each one of us the best time of our life and endless stories to share. It’s just often that the entire team that you work daily with gets an opportunity to work as well as explore together. It certainly did wonders to our soul and we all came back home, happier than ever. We know that it was certainly one of many trips to come in the future but we consider ourselves lucky to have experienced serenity through travel. 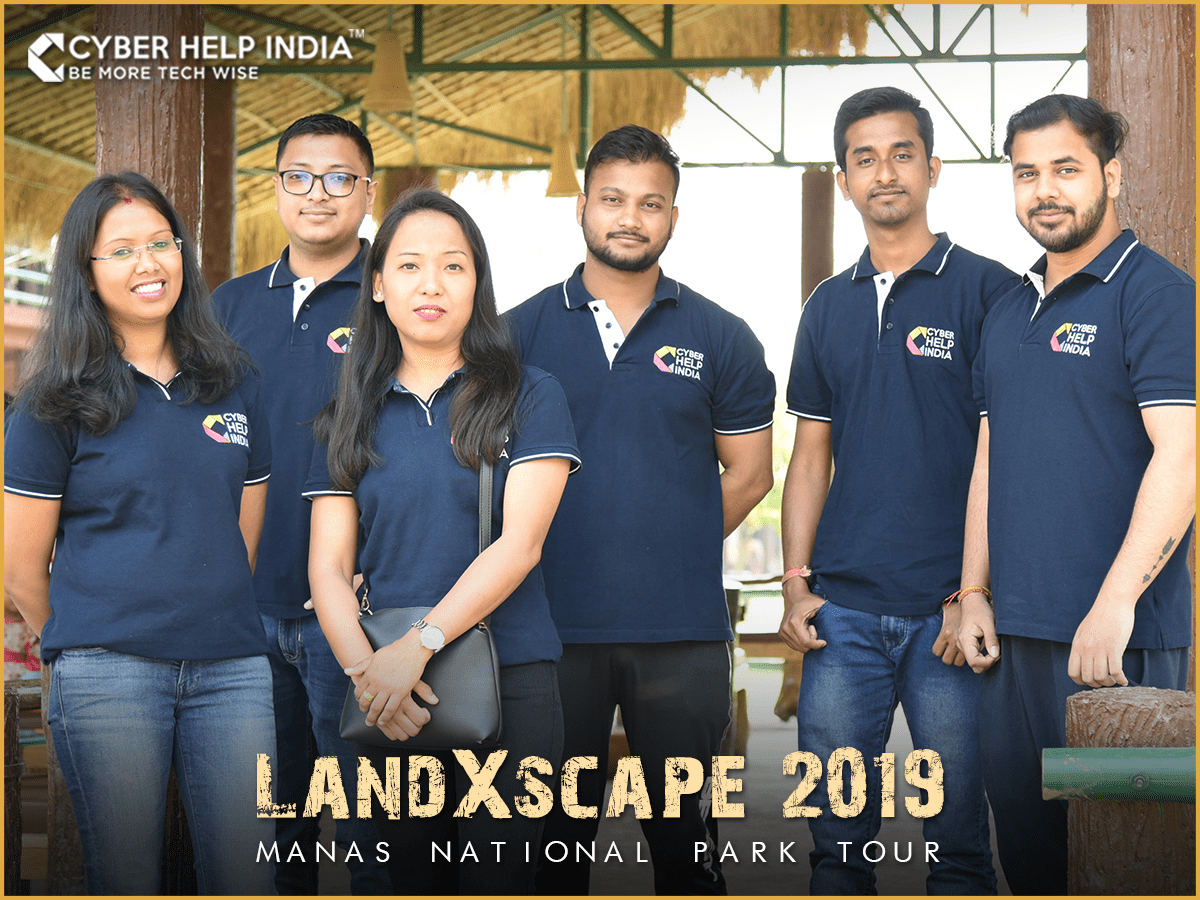 ” Life can be monotonous but moments like this give us some good moments to escape this Monotony. Thanks to Cyber Help India, for letting us write the best time of our life “