Trip to Jhalong & Jayanti – An exquisite vacation filled with adventure

A refreshing initiative for the team and with the team.

Cyber Help India is a leading Website Design and Development Company in Siliguri, which has been providing I.T services, website assistance as well as software solutions to the clients throughout India. The Jhalong trip was a surprise outburst which was announced to the team about a month ago so that the thoughtful arrangements by our co-founders, Mr. Goutam Ghosh and Mrs. Anita Ghosh would see complete participation as well as provide enough time for the team at Cyber Help India to plan accordingly.

The Kolkata team shared their share of grief on being informed about the vacation that the Siliguri, Cyber Help India Team was about to make scheduled on the 22nd July 2018, yet they were promised an equally fun trip for them by Goutam Sir.

One day before the trip

The whole team was busy planning about the trip while some who had decided not to join due to some reasons were being enlightened upon the advantages of making the trip with proper proof of Google Images, which declared the destination to be wild and exciting.The trip had already showered an atmosphere of excitement which had been clouding up more as the day came to an end.

Cyber Help India has always believed that working should also be followed by occasional breaks which level down the amount of stress on the team. So this vacation wasn‚Äôt the first thoughtful initiative yet for some, it was their first. As the day came to an end, the team dispersed quickly promising to be early the next morning as the deadline was 8:00 AM.

Happiness within the Team was not due to the destination but for the opportunity to travel to Jhalong as a team and most importantly, together.

The members of Team Cyber Help India were dressed to their best and were ready for Jhalong which was supposed to be done in our 3 SUVs which were our ride for the whole trip. We finally began our journey in smiles, laughter but were behind schedule time, which was a sure thing. Being an I.T company, the value of each passing minute is vital for us, yet efforts like this from our Founders cements our relationship among each other and provides an opportunity to not only work together but also to have fun together.

Jhalong is a beautiful area which is about 95 kilometers from Siliguri and lies along the Jaldhaka River near the Indo-Bhutan border area. The place is a well known adventure destination which has beautiful destinations throughout.

The journey was scheduled to commence by 9 AM but as all plans work out, we headed at 9:30 not too far beyond the expected time. The three vehicles started off to a wild Jhalong adventure together, just like a safari trip.

A short breakfast stoppage at Gajoldoba 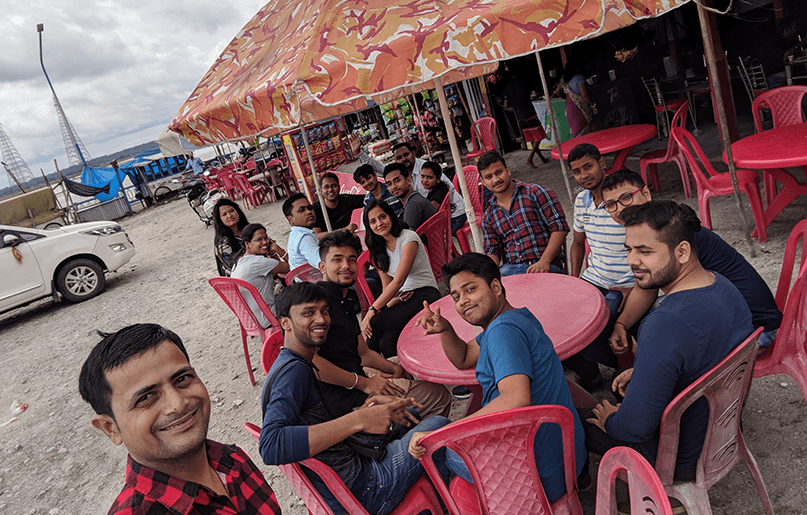 The hunger games were finally resolved as we decided to have a quick breakfast stoppage at the Teesta River Barrage, also a popular tourist spot known as Gajoldoba.

The team wasted no time in feeding themselves with Egg-Toast, omelets, noodles and some refreshments like coconut water which was enough energy supply to assist us for the rest of the journey. The journey started again through the cold, echoing green forest where the crickets were the only noise that we could hear besides our car engines.

After a journey of approximately 3 hours and 10 minutes, we finally arrived at Jhalong. The place seemed to be more beautiful than any of us had ever anticipated it to be. We were gifted with beautiful green surrounding mountains with streams flowing downhill whose sounds were soothing and the excitement of the journey had just doubled itself. We could already feel the change in the environment and the ambiance which was different than the honking jammed streets of Siliguri.

We checked in the Green Island resort whose name seemed to be a brief description of its location and surroundings. The vast stretched resort looked like a green park with beautiful surroundings wherever your eyes can see. We then headed to our allotted rooms to refresh you for the fun to follow as the day passed by.

An empty stomach would never allow you to enjoy to your fullest so we decided to head on with the river camping after the lunch at the resort. The food we ate tasted deliciously tasty and the local taste was something that was to remain with us for the rest of the day. 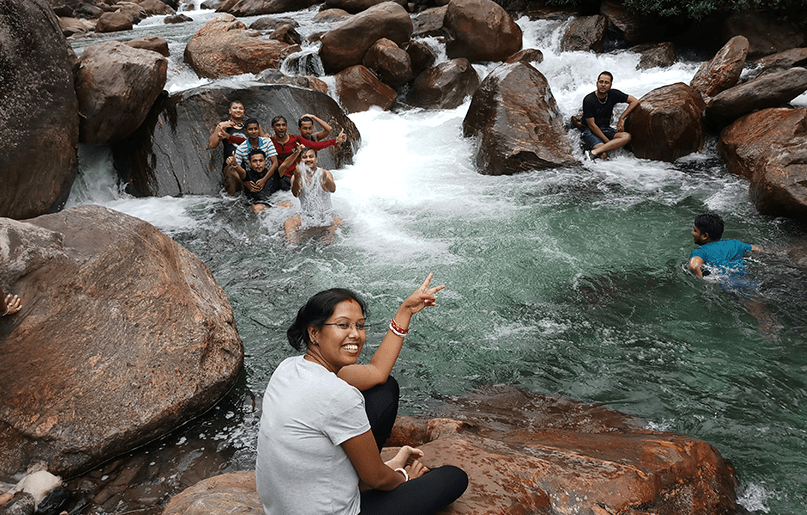 After Lunch we headed towards Jhalong River Camp, the adventure whole team had already made plans about. The white gushing river water was too attractive to be left alone so in no time the whole team of Cyber Help India was down on the river bank half submerged and playing with the water like we had seen water for the first time in our lives. 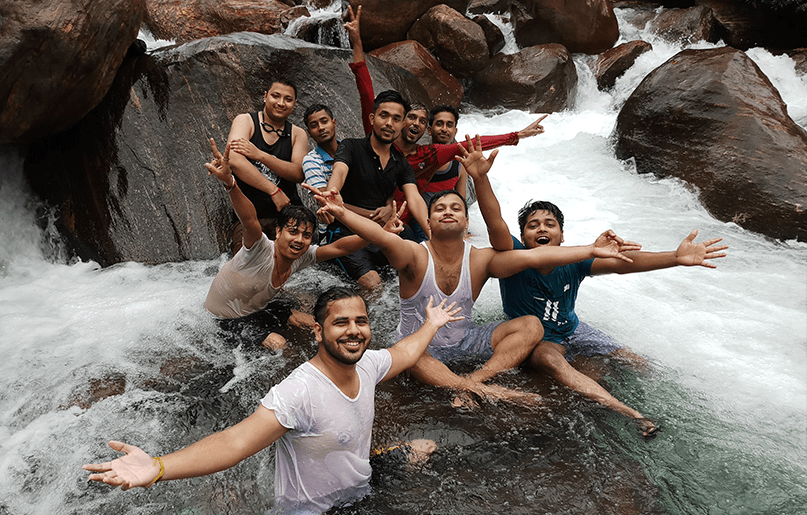 The excitement continued with a few more games that we planned to make the river experience a memorable one.

It was really difficult for Anita mam and Gautam sir to deal with us yet they managed to take care of every single one of us and were also there to have fun with us. For some, traveling as a team was a new experience that they seemed to enjoy to their fullest. Creative games like underwater breath holding and swimming against the flow were some adventure activities that kept all of us engaged.

Tired and back to our own Green Island.. 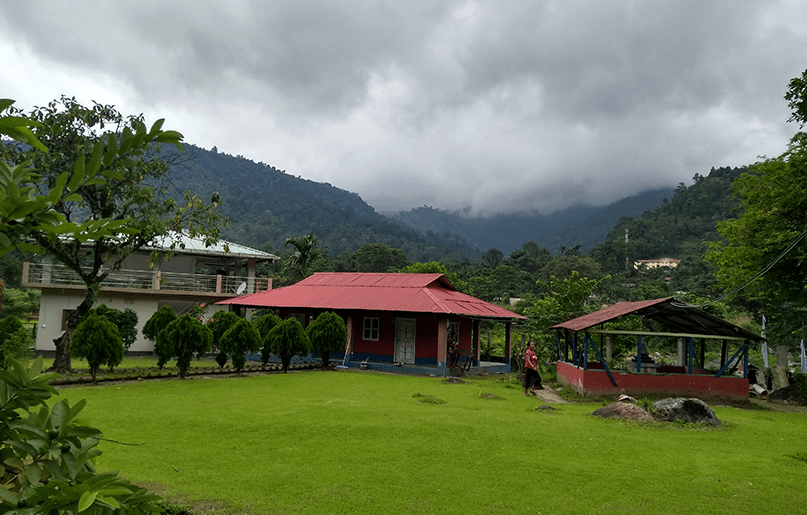 After hours of water activities and just as the day began to lose its shine we decided to head back to our resort, the Green Island. After reaching the team took some time to recharge themselves again and the hot Tea and some onion Pakoras made the environment more exciting and refreshing. Looks like the resort owners could read our minds as they provided us with something, we had been thinking of while we were relaxing after the tiresome River experience.

Before the day came to an end, our I.T experts wasted no time in clicking the best pictures of them and the team which would be perfect for capturing memories as well as for their social accounts.

The evening progressed with ‚ÄúAntakshari‚Äù

The ambiance of the place was exciting enough to have us energized throughout. At around 7 pm, we gathered around the garden area of the resort and just sat back appreciating the environment we were in wondering if we could spend our entire lives in a place as beautiful as this. The night progressed with some rounds of Antakshari, which allowed several shy members of the Team to showcase their singing skills in front of everyone.

The much awaited dinner!!

After a tasty lunch session, we were all ready to discover the menu for the night and thus after few hours, the dinner was finally ready and in no time the whole team was gathered around for the dinner. The reputation of their cuisine was held higher as we ate some tasty fried rice and some chicken chilly for dinner which tasted different than any we all had ever eaten.

The get together at night!

The night didn‚Äôt end here. Gautam Sir invited all of us to a room where he shared some memorable and life-changing incidents of him. Each one of us shared one memorable incident of life which is very likely while people gather together. We went to bed at around 2:00 am with a sigh of relief as our hearts were filled with happiness and tranquility. 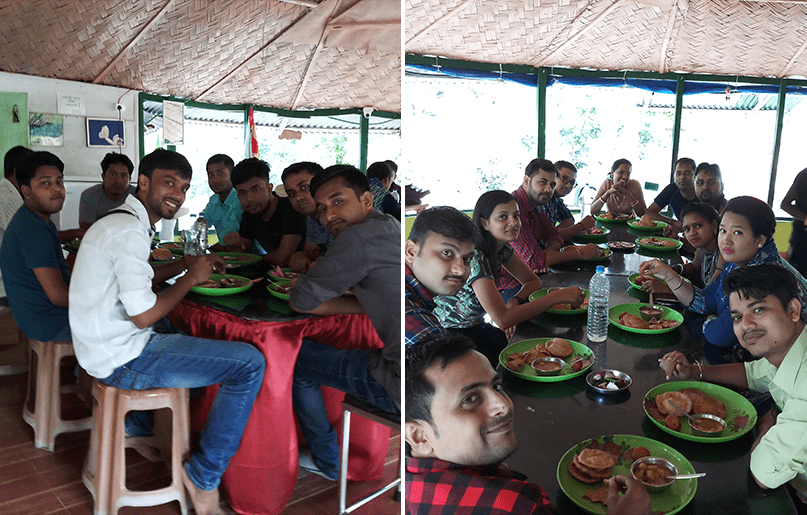 After waking up before the check out time, we bid farewell to the hospital Green Island Resort and the beautiful surrounding after we were served with some Potato curry and some Puri‚Äôs followed by some sweets which were supposed to keep us full until our next stoppage.

Towards Chilapata and then Jayanti

After checking out of the resort, we set off towards Chilapata Forest which is a dense forest near Jaldapara National Park. After crossing, the entry gate of the forest the whole ambiance changed suddenly. A buzzing sound of insects, chirping birds, and lush greeneries confirmed that we were entering ‚ÄúJungle‚Äù. After arriving at the ticket counter, we discovered that the ‚ÄúSafari‚Äù was not available as of July to September is the breeding time for animals and they do not come within the proximity of the roads. Later, we all decided to visit the Jayanti River next.

Lunch at Nimti-a road side dhaba

While heading towards Jayanti, we stopped at Nimti which is a roadside dhaba and is considered to be the best place for having lunch. The mutton curry truly deserved to be appreciated and was truly a different eating experience to remember. As we were short of time, we decided not to delay further and so we headed towards Jayanti. It took almost 1 and a half hour for us to reach there. 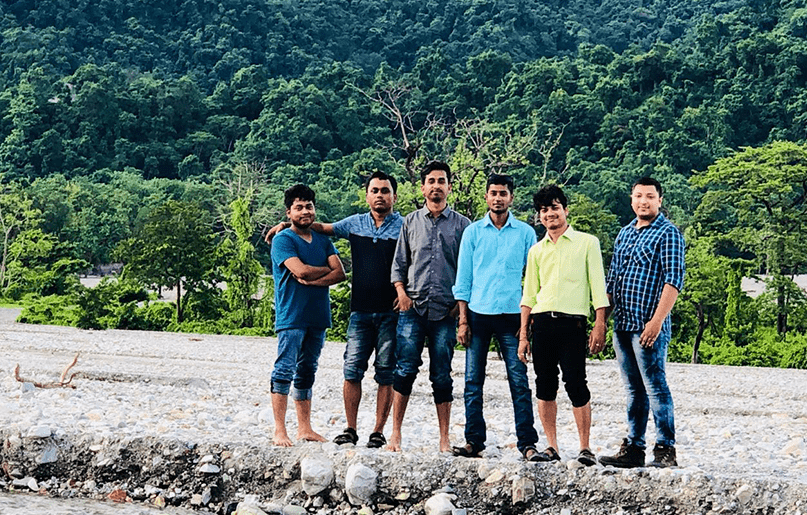 The view of the mountains which separate India and Bhutan was breathtaking and admirable. All of us indulged in selfies and jumped unto the Jayanti Riverbank for some better photos. It was a marvelous experience for all of us and the magical view of the mountains covered with lush green forests and the crystal clear water of the Jayanti River added some more beautiful memories to our ongoing adventure experience.

Jayanti was so beautiful that by the time we have had enough of the water; it was already 6 in the evening. After some refreshments and a little break, we finally ended our long awaited vacation by heading towards Siliguri at around 7 pm. The journey back to Siliguri was a long one as none of us wanted the vacation to end. We finally reached Siliguri at around 11 pm and headed back home with so many memories that we bought back with us.

It was not the destination

We at Cyber Help India have always been trained to work collectively and work combinedly towards a common goal. So, the vacation to Jhalong was an unforgettable experience but it must be noted that it was not the destination that made the journey so memorable. It was the presence of the entire Team and the joy of enjoying together as a team that made the vacation a moment which will be remembered in our hearts forever.

The strength of Cyber Help Team lies in the unity of our Team and this memorable trip is one of thousand more golden memories that we are yet to experience but always as a TEAM.